On the left bank of the Seine, overlooking the river against the unmistakable silhouette of Nôtre-Dame, a small books is oftentimes today overflowing with customers, but not everyone knows the story – and the original soul – of this place today devoted to reading. 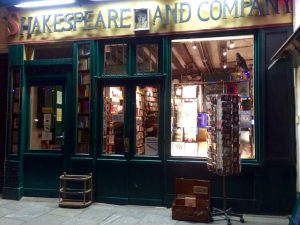 1951: at 37 di rue de la Bûcherie, a bookshop of English books called Le Mistral (‘The Mistral’) opens his doors to the public for the first time.
The owner was a 38-years-old American called George Whitman. To open his bookshop, George chose a building once part of a monastery dating back to the beginning of the XVII century (around the period of Alexandre Dumas’s musketeers!)
Between those old walls, George brought the hundreds of books he had collected while he was studying psychology and French civilization at the Sorbonne.

In 1964, the shop name changed to Shakespeare and Company. Why? For starters, to celebrate the four hundredth anniversary of William Shakespeare’s birth, but also to honor a bookseller Whitman deeply admired, Sylvia Beach, founder of the first Shakespeare and Company in Paris (year 1919), once found at 12, rue de l’Odéon, a nearby street on the same bank of the Seine.

At the times, Sylvia’s bookshop had been a place of meeting for many writers, not only French but mainly ex-pats (Joyce, Hemingway, Stein, Eliot, Pound, Fitzgerald…).

George wanted to keep up the tradition that the new name brought with it to its bookshop, with just his Whitman touch: the new Shakespeare and Company would be not only a place of meeting and cultural exchange but also a haven for every artist, writer or intellectual with no money and no roof over his head for the night.
George called them Tumbleweeds (just like the ones in the background of western movies). Those ink-hearted adventurers came and went on fortune’s wind, slept on improvised cots between the book-filled shelves and had some daily duties: read every day, help in the shop for some hours and write a page of their autobiographies. That created an incredible archive of personal life stories, still carefully preserved today. 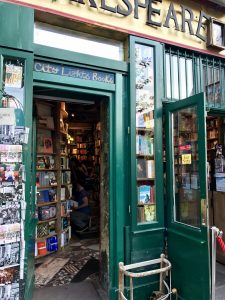 In 2011, George’s daughter – whose name is obviously Sylvia – launched the Paris Literary Prize, a literature contest for emerging novelists from all over the world, hosted by the library.

The same year, George Whitman passed away, after a long life devoted to literature, art, exchange and the sacred laws of hospitality.

His library still harbors travelers, literary events, debates, music and so much more.
On the ground floor, the books are for sale. On the first floor, the beloved Whitman’s library is open to anyone who would like to sit down and lose himself in a paper travel.

I would have loved to personally thank this generous man, maker of a Paris corner that smells of paper and travel, where the English language resonates and where travelers from all around the world leaf through books, looking for their next destination.
So, thank you and safe tidings, George Whitman, wherever you are.