In 1756, the powerful favorite of King Louis XV, Madame de Pompadour, a cultured woman of refined tastes, wanted to offer a new branch to the porcelain manufacture of Vincennes, founded in 1783 around Paris. The new branch would have been built by her order, in Sèvres.

At the museum Cognac-Jay, during the exposition La Fabrique du Lixe (ended January 27th, 2019) I found some very sophisticated soft-paste porcelain created between 1748 and 1753 when the factory was still at Vincennes. The production of these wonders was the foundation of the manufacturer’s success. It had become so important that it needed a dedicated atelier, the famous “fluerisserie”. 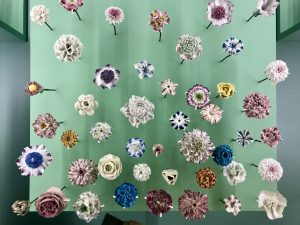 It was the golden period of rococò, and the beautiful, colorful buds were a perfect match with the latest fashion.

Through the overabundance of decorative elements, the insides of the aristocratic residences wanted to recreate the concept of nature spread by the Enlightenment, so, a sort of cutesy paradise, overflowing with innocent pleasures.

Director of the “fleurisserie“, under whom worked twenty women artisans, was Henriette Gravant (that’s right, a woman!), wife of one of the three founders of the manufacture.

Sadly, in 1753 the access to the manufacture was forbidden to the women who, from that moment on, had to work from home to continue producing the flowers necessary to create the precious artworks, like the rich birdcage shown ad the exhibit itself (1750). 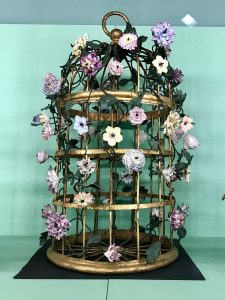 More often, the porcelain flowers were used to create the famous bouquets of Vincennes, that enriched the interiors of the aristocratic homes, like the one preserved at the Musée Lambinet. 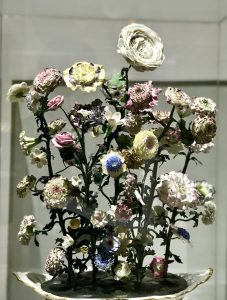 We could find more marvels of the Vincennes period even in the Louvre’s rooms, like these 1750 cups, a true hymn to nature. 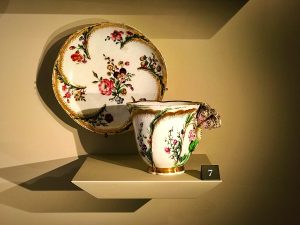 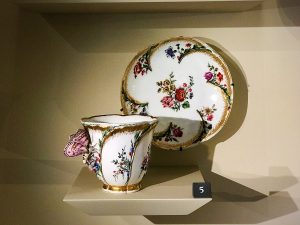 One of the most successful productions of the manufacture was, later on, the biscuit, a kind of porcelain very easy to manipulate that imitates marble.
With the biscuit were made small statues, loved by the richest classes of the XVIII century. They usually were copies of models by the most fashionable artists of the time.

At Museum Lambinet in Versailles, for instance, there’s a biscuit in soft porcelain sculpted on the theme of the “grape eaters” (ca. 1760) by François Boucher, art teacher, painting and engraving of Madame de Pompadour herself, and “First Painter of the King.”

One of the biscuit figurines representing Love and Psyche at the Getty Museum in Los Angeles is a copy of the famous marble sculpture by Étienne- Maurice Falconet, preserved at the Louvre.

Not by chance, Falconet was director of the manufacture from 1757 to 1766!

The same goes for the sweet “Melancholy”, exhibited at the Louvre as well, and as well as a copy of a marble sculpture by Falconet (1763).

Falconet’s figures are affected by the new tendency in taste of the 60s of the XVIII century: the classic sobriety, slowly replacing the decorative excesses of the rococò, the artistic season that had made the fortune of the manufacturer. 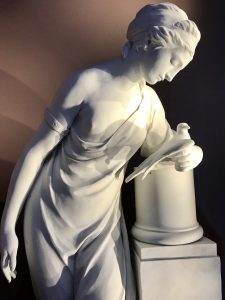 To this day, the Sèvres Manufacture continues its delicate work, respecting the ancient techniques thanks to the skills of 120 ceramists producing around some thousands of pieces per year destined to State agencies (Palais de l’Elysée, Hôtel Matignon…), or sold in the Sèvres galleries in London and Paris, or during art salons.

To get your fill of wonder, you can’t miss the beautiful museum right inside the Manufacture!

Now that we know something more about this extraordinary manufacture, keep your eyes peeled when you walk through Parisian museums because the wonders of Vincennes or Sèvres are unnumbered. After all, we’re talking about more than three hundred years of work!