The Doors of Hell by Auguste Rodin (1840-1917) has many things to tell, first of all about its author.
It should have been destined as an entrance for the new – and never built – Museum of Decorative Arts. The Doors represented the first, big State commission (1880), a unique opportunity, considering Rodin was 40 at the time, and way far from success.

The decoration would have consisted of bas-relieves depicting Dante’s Divine Comedy, and it’s not far-fetched to think that the theme could have been suggested by Rodin himself, who had been deeply touched by Dante Alighieri’s masterpiece, particularly by his “Inferno”. The Doors should have been a completely Italian-inspired work. The artist took his inspiration from the wonderful doors of Florence’s Battistero (Ghiberti, XV Century). The sculptor completely closed himself in his work: the adventure had just begun.

After for years of work, Rodin seemed to have found a satisfactory version of his Doors, but thanks to the well-know “luck” of emerging artists, it was just then that he got the news that the museum’s project had been abandoned. «Their loss», Rodin thought, he wasn’t easily discouraged, «and our gain», I’d say, and I’ll tell you why.

The Doors of Hell wasn’t left aside, on the contrary, it became a sort of personal creative reserve on which Rodin experimented an indefinite number of possible assemblies for dozens of sculptural groups. In ten years of studying, working, trials, sacrifices, as in a modern Pygmalion rendition (the Cyprian sculptor who fell so much in love with one of his female statues that Aphrodites, moved, granted her life), some of these figures freed themselves from the door, getting their own personal dignity as stand-alone masterpieces. That happened, for example, with “The Kiss”, a separate version of the sadly famous couple formed by Paolo Malatesta and Francesca from Rimini, or “The Thinker”, the evolution of the image of the Poet himself, towering over the Doors of Hell, in other words: Dante Alighieri.

If the Doors could tell us about its author it would certainly tell us about its relentless creative impulse and its unrest, systematically blocking him from finding a proper conclusion for his masterpiece. With the passing of time, the work progressed, and the more it did, the more Rodin changed his composition, getting closer and closer, someway, to the tormented condition of the damned he was depicting.

Gradually, the Doors‘ project got farther and farther from the traditional representations of the “Inferno” of the Comedy to become something else. A new influence radically marked Rodin’s vision, charged, in 1887, to illustrate an original edition of the Fleurs du Mal (“The Flowers of Evil”, 1857) by Charles Baudelaire(1821-1867).

Dante’s verses got mixed with the dark and heart-wrenching images summoned by the ones of the famous French poet, who had died twenty years before. The damned, deprived of a precise context, without any evident reminder to the classic torments or their torturing demons, slowly turned into pure representations of desperation, in a word, in archetypes.

Six years after its commission, the sculptures that freed themselves from the Doors were exhibited in the George Petit gallery, with a stunning and original disposition, where every piece was accompanied by the very wonderful verses, of the Le Fleurs du Mal. The statues had become material representations of the sensual, intimate and at the same time universal poetry by Baudelaire, taking its distance from Dante’s traditional model.

At the same time, the figures on the Doors too had freed themselves from the original design to depict the human condition and its miseries, fears, passions, becoming a tangle of ghosts that simply are what they are, without any moral perspective. Dante’s Inferno left the world of demons to dive into the world of men.

A version of The Doors of Hell was finally exhibited to the audience in 1900, during the Expo, but, of course, it couldn’t be a smooth ride. The sculptor, as I said, wasn’t the easily self-satisfied type. When he finally ultimate the – theoretically – final version, at the last minute Rodin thought that the Doors was absolutely unacceptable, with too rich an ensemble, too intense shadows, and so he took away the most prominent figures. The masterpiece was exhibited, all right, but incomplete, because there had been no time to adjust it properly.

To get an idea of the richest version Rodin had made before, just a moment before those last changes, we could look at the plaster model kept in the Musée d’Orsay, which was realized only in 1917, the same year the sculptor died. 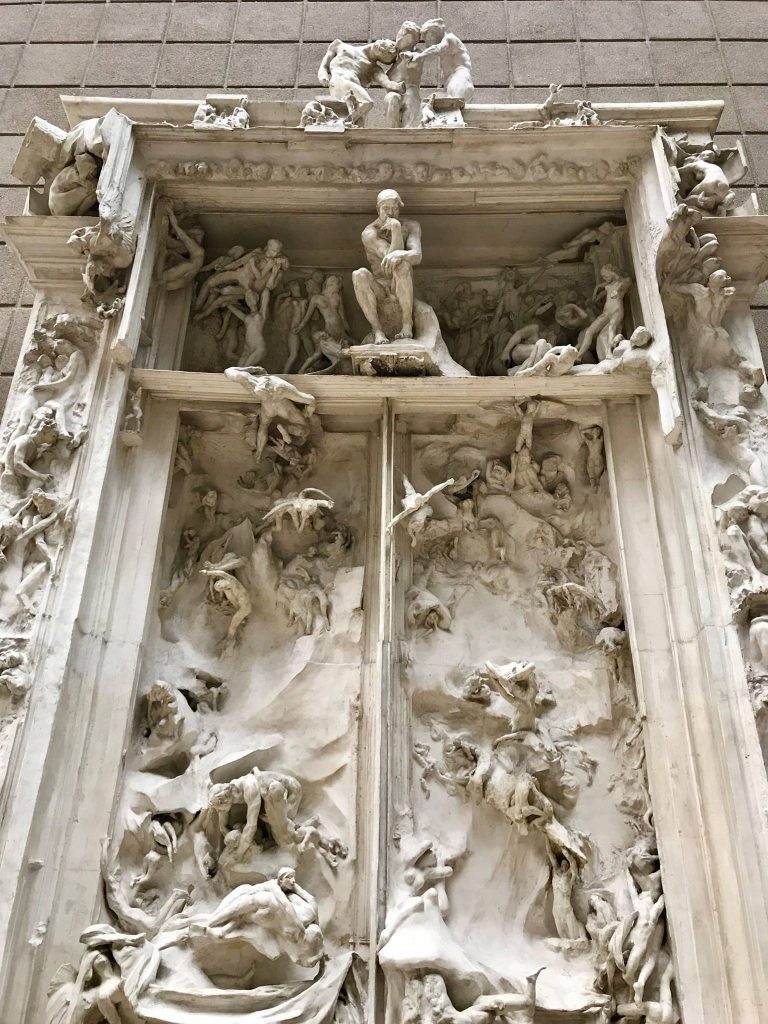 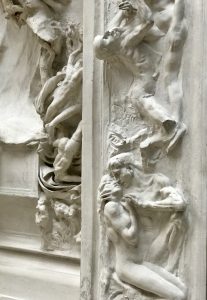 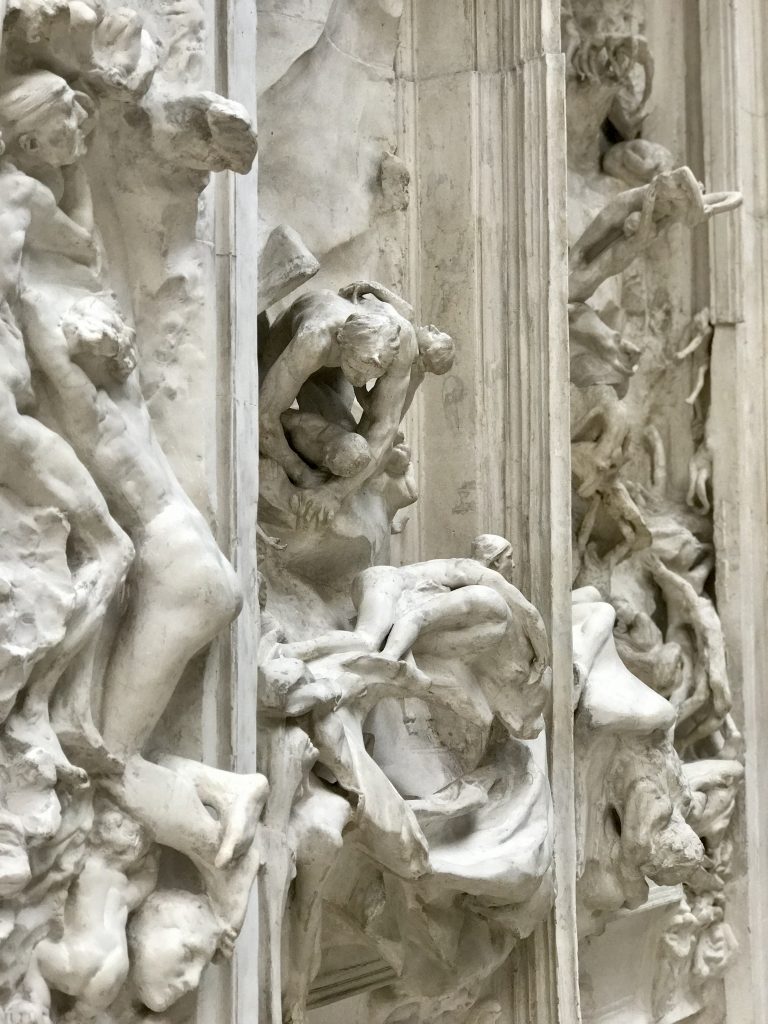 The Doors exposed in the Musée Rodin‘s garden was cast in bronze based on this plaster model, between 1926 and 1928, and it’s exhibited to the public for free.

If you can, take a moment to meditate in front of the Doors. Its entangled, stretched, crouched, twisted and curvy silhouettes are far from inspiring the terror of eternal damnation. They rather call for compassion, through the thousands of faces of pain, torment, and desperation of the human condition.